Kabuki Boy is a novel of Japan set in and around the capital city of Edo (modern day Tokyo) during the waning decades of the Tokugawa Er (1600-1868). . . A vivid portrayal of that tumultuous period through the eyes of its peasants, priest, politicians, revolutionaries, mountebanks, geisha, and actors, it centers on the life of a Kabuki boy actor whose brief but illustrious career reflects not only the "golden age of Kabuki Theatre," but the most dramatic spiritual, political, and artistic events characterizing Japan's violent emergence into the modern world.

Set during Japan's Tokugawa era (1600-1868), Besserman's novel explores the declining social status of the samurai class through the lens of Myo, the bastard son of a geisha. Although historical context drives much of the plot, the core story focuses on Myo's personal adventures, large and small, as he moves through society. In the background, an unfolding revolution proves both pivotal and incidental to Myo's story—much as the larger events of our lives become fully decipherable only in retrospect. We follow him as he tries on different roles: apprentice to a physician; store clerk-in-training; kabuki boy. In this final job, Myo finds himself in a position straddling influence and impotence. In these opaque echelons of Japanese society, Myo consorts with the same samurai to whom he has spent his whole life in subservience. Told through several perspectives—in letters and in the form of Myo's diary—the novel has the presence and solidity of an historical artifact, but humanity and its accompanying emotions—regret, humility, filial respect, burgeoning sexual love, purpose, and belonging—are ultimately what draw the reader into Myo's intriguing world.

Kabuki Boy: A Novel of Old Japan presents the story of young actor/concubine Myo from five points of view. As it did in Stevenson’s prescient-modern Jekyll & Hyde, this fragmentation exemplifies a break with the past that creates perspective and depth beyond genre fiction.…Expecting a genre historical set in 19th century Japan, the reader instead accompanies [Perle Besserman] on an eloquent hybridization characteristic of current globalization in the arts. You can put Kabuki Boy on the list of must-reads.

Kabuki Boy, Perle Besserman’s ambitious portrayal of Japanese life at the end of the Tokugawa dynasty (1600 – 1868 C.E.), succeeds on many levels: it is lyrical, complex, poignant, and most importantly redemptive, both for the reader and for the egoistic characters within.

Written in the first-person limited with various perspectives throughout, Kabuki Boy opens, with a nod to the etymology of its form, in a novel and intriguing way. A letter, ostensibly written by Murayama Yoso, the modern-day abbot of a Shofuji monastery in Japan, describes Yoso’s “discovery” of the works that comprise the main text. For the first two-thirds of this text, the reader will peruse the journal of young Nakamura, a boy actor-turned-priest who desperately seeks spiritual enlightenment. The remaining third of the novel contains a series of letters written by Nakamura’s friends and acquaintances, a short play, and finally a record penned by the monk Gen, a man whose connection to Nakamura will come to define the lesson of the novel, as well as both men’s lives. The novel is bookended by another letter from Yoso, placing the reader once again in the modern day and allowing her to apply the text to 21st-century life.

Although the panoply of forms and perspectives crafted throughout Kabuki Boy is certainly creative, Besserman’s artistry at times overshadows the content of the text. Moreover, though Besserman likely intended the fictionalized Yoso to lend authenticity to the meat of her work, instead the abbot often serves to make the reader more conscious of the author’s manipulation, which, admittedly is already obvious; Besserman repeatedly chooses language that is too modern for the period, disrupting scenes and putting an end to the reader’s reluctant suspension of disbelief. Falling short of postmodernism, Besserman’s endeavors ring phony and forced.

However, what Besserman lacks in authentic narrative she makes up for in beautiful imagery and in a plot to which modern-day readers can relate. The central focus of Kabuki Boy is the end of cultural values as the characters know them. The role of social hierarchy is called into question, as is the role of art. Indeed, Besserman’s characters, most of whom are actors and performers, struggle to find meaning within an unusual social class. As artists, they are repressed by an elite that on the one hand views them as threatening and subversive and on the other hand enjoys exploiting them for entertainment and sexual pleasure. Still, though one might imagine the actors would embrace a change in the social hierarchy and an escape from such exploitation, Nakamura laments, “In the old days it was simpler.” In the old days, actors had a different sort of power.

None of the major characters can truly be said to be ready for the inevitable change in social structure, since all of them in their own way benefit from the existing order. However, they must all learn to adapt to the changes and also to deal with the cruelty they face, each a pawn in a system of trickle-down exploitation. To do so, they fall back on art and its transformative, redemptive power to change an audience even after its members exit the theater.

As the scope of the novel widens, readers discover that Besserman has the same goal in crafting Kabuki Boy as Yoso has in sharing the stories he collects. Like Yoso, Besserman yearns to connect with others and to preserve the stories of the characters she loves. She urges the reader to pass these stories on, and in doing so she inspires the reader to share her poignant message. “I’ve been waiting for you,” Besserman writes, “since before your birth.” You can almost hear the “dear Reader” in her plaintive cry for help. 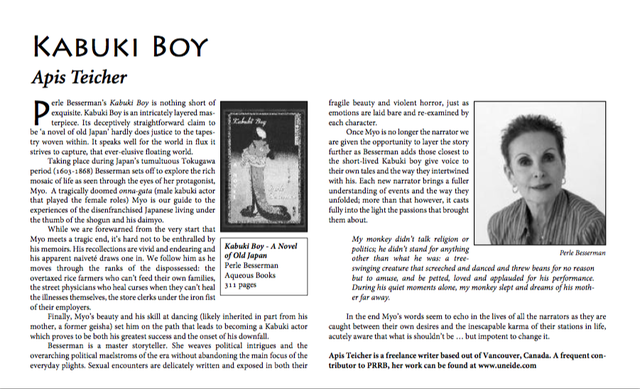 To expand this image from the spring 2016 issue of the Pacific Rim Review of Books, click on it.

". . . a compelling tale of sexual ambiguity and illusion . . . evokes the sensibilities of the [Japanese Tokugawa] period while retaining a freshness that speaks to the twenty-first century reader." -- Chris Hudson (Associate Professor Asian Media and Culture-RMIT University, Melbourne, Australia)

"With a rare skill, wisdom, and deep knowledge, Besserman evokes Japan of the 19th century so vividly that you immediately feel at home in this exotic world steeped in superstition and ceremonial suicide, brutally oppressed peasants and mysterious geishas, doctors trading in magical potions and mischievous Zen monks. Kabuki Boy is one of those rare books that has everything . . . . I couldn't put this book down." --Lee Kofman (Israeli-Australian author of The Dangerous Bride)

"Besserman makes the bold assertion that readers will be transported capably to another time and place. She delivers. The narrative is rich in sublte description and infused with sexual tension. The key relationships are kept deliciously ambiguous. . . . Besserman succeeds in satisfying the great urge of all readers to experience the unfamiliar as insiders." --Mitchel Stocks (Lecturer City University in Hong Kong)